Idiom I is the first of two consecutive exhibitions at the Pierogi Gallery in Williamsburg.  According to the write-up by the gallery, Idiom I is designed around the concept of “willing suspension of disbelief,” meaning that even if the narrative of the piece is fictional, the viewer can will it into reality because it also contains “human interest and a semblance of truth.”  It’s like when someone points out the implausibility two people getting together in a movie and you tell them to shut up because it’s so beautiful.  It’s getting lost in a fantasy and believing for just a moment that it could be true.  This moment becomes the second part to the idiom that is revealed when viewer collides with work.

So, with this philosophy in mind I entered Pierogi ready to eat up some disbelief.  Unfortunately, I did not achieve the desired feeling with all of the works.  Everything was stunning, but perhaps too fantastical for me to will forward a moment of belief.  Actually, let me rephrase.  It wasn’t that I couldn’t will it forward, but that I didn’t want to.  I didn’t really want to believe in a green blob with eyes or a vagina in a hillside sprouting with trees.  Reason for the former: aliens, robots, and green blobs seem to be popular right now, but I just can’t get into them.  The latter:  I think the suspension of disbelief for this piece would simplify the imagery it invokes and I personally would rather question why the artist feels the female genitalia is as such than believe in the fantastical landscape.

I was, however, quite taken with Ryan Mrozowski’s paintings, Orange Painting #1, #2, and #3.  Suspension of disbelief was easy with these three works—the more I looked at them, the more I felt like I was in Florida in the summertime.  I believed there were oranges (or reproductions of oranges) in the painting before I realized that there actually weren’t—what I had perceived to be oranges were just orange circles amidst leaves.  I also enjoyed Mrozowski’s work, Untitled (Small Audience), 2008, which was a painting of the backs of heads in an audience.  It made me recall times when I have been a part of a weirdly related community of theatre or moviegoers.  The piece also provides some comic relief, though it is mingled with a touch of discomfort as emphasis is placed somewhere it typically wouldn’t be.

So, the cat’s out of the bag.  Or maybe the cat’s still in the bag.  You decide—check out http://www.pierogi2000.com or visit the gallery on your next trip to Williamsburg. 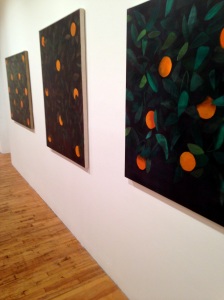 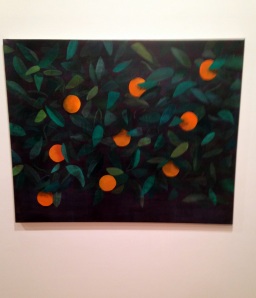 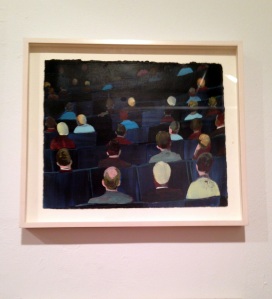